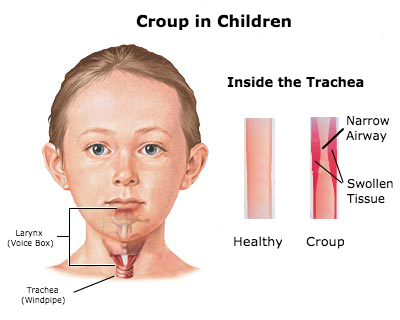 Croup is a viral infection of the throat and windpipe that causes swelling of the voice box (larynx) and windpipe (trachea), resulting in noisy breathing and a barking type cough. Often croup begins as a cold. It can be worse at night when the weather is cooler. Croup usually affects babies and young children.

The airways of babies and children are already narrow compared to adults. When they become unwell with a viral infection it causes the airway to swell and become narrower whilst also developing mucous, making it difficult for air to reach the lungs and difficult for children to breath.

Croup often develops like the common cold then your child may progress to have:

Often the symptoms start at night when the air is cooler and dry. The symptoms can become worse when the child is upset.  Croup can last for approximately 3-4 days.

While croup is often mild it can get worse quickly. If your child is severe they will need urgent medical attention in the emergency department.

Mild croup can be managed at home with the following:

If your child requires treatment for croup they will be given Prednisolone (steroid) by the doctors which helps reduce the swelling in the airways. In severe case adrenaline may be administered via a nebulizer or an injection, which relieves the swelling until the prednisolone takes effect. Antibiotics will not treat croup as it is a virus.

Steam therapy does not help. This was recommended in the past including the use of vaporizers.  Current research shows this of no benefit and regarded as dangerous because of accidental burns.

If you are concerned about your child you should seek medical advice. If your child looks sick, pale drowsy or blue in the lips you should call an ambulance immediately.