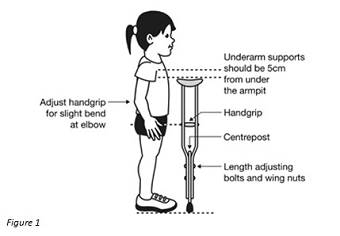 Crutches reduce the amount of weight placed on an injured limb aiding your child to recover from an injury.

Crutches need to be fitted for correct use.  A guide is that the top of the crutch should be no more than two finger widths below the armpit, whilst the handles should be positioned so that the child’s elbows are almost straight when your child is standing.

There are four main steps to using crutches:

Use of Crutches up and down stairs