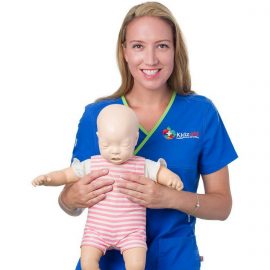 What would you do if a seemingly perfect child in your care became pale,floppy and unconscious in your arms? In 2011, Brionhy Westbrook, a then stay at home Mum was faced with exactly this crisis.Brionhy, also a highly trained critical care nurse put her knowledge to work,consequently saving her six-month- old daughter’s life.Brionhy’s two children, and 17 years experience in critical care nursing,cemented her belief in the need for pediatric first aid training in the community.”It’s because I’m a Mum and an emergency nurse that the business cameabout. I think about how precious my children are and how terrifying it wouldbe if I was in a situation people often face and didn’t know what to do.”“If I didn’t have my kids, I wouldn’t know how important it is to have this knowledge.”

“Being an emergency nurse and dealing with life and death, it’s reallydevastating seeing families lose their loved ones. It makes you think why
hasn’t this happened to me and that it could, so the fear and the opportunity tochange circumstances is real.”Each year approximately 250 Australian children are killed and 58,000 hospitalised by unintentional injuries. This was the impetus for Brionhy to found KidzAid.

“Our mission at KidzAid is to educate as many parents, grandparentsand carers within the community about the importance of learningpaediatric first aid. Knowledge is power and there is nothing more importantthan being prepared and confident to act in an emergency situation.A large majority of presentations to the emergency department arepaediatric cases (infants/children); parents often present feelinghelpless as they don’t know what to do. I’m hoping to educate as manyparents as possible about the importance of having these lifesaving skills”.

Since KidzAid’s beginning the KidzAid team has received countlesscommunications of thanks for reducing the stress that can be present in an
emergency or during illness. They have also received phone calls from participants who have literally saved their own child’s life using the knowledge gained in a KidzAid course.These types of calls deeply touch the team and give Brionhy the determination to continue with the mission of educating as many people as possible in pediatric first aid training.

Brionhy has worked in Australia’s largest and busiest emergency departmentsand supported medical professionals in their private practice. Before moving
into the health field, she studied business and finds these mix of skills highly useful as KidzAid’s Director.Brionhy continues to facilitate courses when possible because first aid education and training remain her number one passion. Brionhy also believes that it is one way for her to personally ensure that KidzAid is meeting the expectations of people participating in a course.Brionhy recognizes that the course content – serious injuries, choking, fevers, febrile convulsions, burns and drownings – can be confronting. For thisreason, Brionhy not only wanted the highest caliber trainers but also people
who are highly capable at relaxing and reassuring individuals. The KidzAid team is sensitive, highly trained medical professionals (either paramedics or
critical care nurses) who are passionate about sharing first aid knowledge.It’s a busy year ahead for the team with more workshops rolling out and agoal of imparting more knowledge in new easily accessible ways, including reaching high-risk regional groups. “Due to the vast distances and travel times in the country, when you ring triple-zero an ambulance is not always going to be there within eight minutes like they are in Sydney or Melbourne.”If you’re armed with the right information you can really help emergency services and drastically reduce your own stress levels in an emergency.”The carefully developed workshops have overcome a gap in the preventionand treatment of babies’ and children’s injuries and illnesses. A significant number of myths and misconceptions remain in this area and our job is to bring up to date information to people who want it.